skip to main | skip to sidebar

Do you suffer from OCD ?

Thousands of people around the world suffer from OCD (or Obsessive Compulsive Disorder), an anxiety disorder in which an individual suffers from unwanted repetitive thoughts and behaviours. It occurs in a spectrum from mild to severe, but if severe and left untreated, can destroy a person's capacity to function at work, school or even at home

Two major symptoms of OCD are obsessions and compulsive rituals. They often centre on one or more of the following issues:
- A person with OCD may constantly worry about having dirty hands or clothing, or catching or spreading germs. In some cases, it extends to sexual activity.

- They worry that the front door isn't locked, the oven isn't turned off, or a cigarette hasn't been snuffed out.

- They fear losing control and harming others.

- They are obsessed with order and precision, may feel very anxious if even the smallest detail is out of place.


Most people with OCD resort to repetitive behaviours called compulsions like the following:

- Repeating routine actions a number of times until it feels right. For instance, checking if lights are switched off or appliances are unplugged.

- Excessive checking of door locks, the fridge or stoves.

- Unnecessary re-reading and re-writing or excessive praying and performing rituals.

Stress from unemployment, relationship difficulties, problems at school, illness or childbirth can be strong triggers. Being a victim of sexual abuse as a child, can increase the chance of developing OCD as an adult

Posted by Unknown at 4:04 AM No comments: 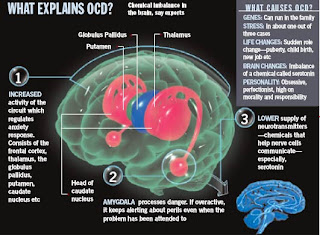 20yrs ago , OCD was considered a rare disorder affecting only 0.5% people.

According to WHO , OCD is one of the 10 leading causes of disability

Over 12 million Indian have it in one form or another

Email: drmongia@ocdconsult.com
Posted by Unknown at 2:32 AM 2 comments: